12 DESTINATIONS TO VISIT FOR VEGAN TRAVEL

Is it just me or don’t you think that traveling the world has never been easier? Airlines are providing more routes, cheaper flight tickets are getting much easier to find especially if you book in advance and finding good affordable accommodation is easier to find with more options available. Not so much for vegan travel but they are on the rise!

I have found that whilst everyone wants to travel regardless of destination, their dietary requirement might be a stumbling block to choosing which destination to visit. This was highlighted to me at one of my best friends party and they were all vegan albeit myself. They were discussing where they had been to on holiday and mentioned that it was a good destination as they had a number of vegan restaurants.

I sat there gobsmacked cause that was where I realized that my vegan friends tend to book holidays depending on the availability of vegan options in the city they are heading to.  I’m still baffled by this! Although I’m guessing that this might not be the case for all vegan travelers.

I will be upfront with you, I am not vegan, however, I am open-minded to it. As one of my best friends is vegan, she is teaching me what veganism is about and what it means to her. Here’s the thing, she isn’t the type to enforce her ideas on anyone which I am grateful for and I am someone who is open to anyone’s believes, ideas –  well, you get my point.

And when you have been introduced to a new thing, you just see it everywhere! I’ve noticed quite a number of vegan eateries during my recent travels. Veganism is on a rise as well as vegan travel. I believe that there are more places that are catering to Vegan food now and I like to share my findings with you.t

That said, here are my top 12 cities that make travelling as a vegan easier (in no particular order and I will add to it as I travel more):

Oh good ol blighty London! You can find almost anything in this vibrant city from culture to palaces, food markets and their food scene is just expanding and expanding. They just opened a crisps shop recently (that’s potato chips). So don’t be surprised to find an abundant variety of Vegan restaurants here or restaurants that have vegan options as well.

Mildreds is notably one of the famous ones located in central London that does vegan options and vegetarian. Or if you fancy something sweet, venture to Brixton to Ms Cupcake which is a vegan bakery. And Norman’s Coach & Horses in Soho which is London’s first vegan and vegetarian pub!

Leuven is a charismatic student city located 20 minutes by train from Brussels. It is almost a foodie heaven known for their chocolates and beers and culture, and they have vegan-friendly restaurants.

There is this amazing restaurant called Green Way which comes highly recommended by a friend of mine who lived here for several months. Greenway is a known vegetarian place which is also vegan friendly; and there’s also Loving Hut and Vegaverso located at Tiensestraat 20 serving wraps, burgers and ‘not-dogs’. 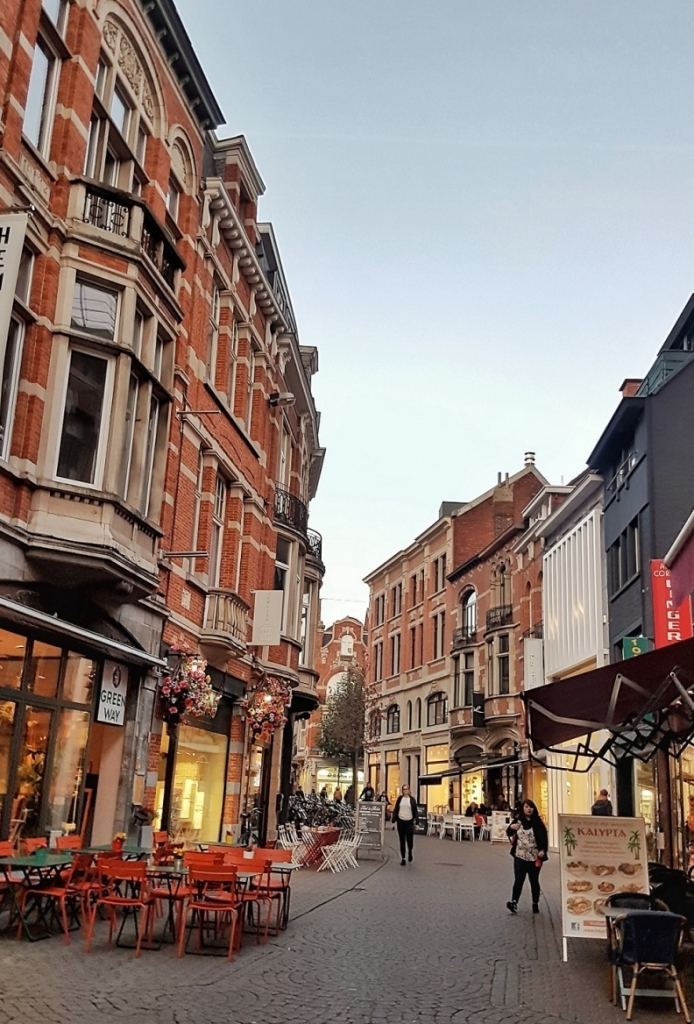 The Grassy Hoppe is a notable vegan and vegetarian restaurant in Gzira which is near Sliema, and GreenMood located in Gozo which offers a salad bar and soups.

What can I say, Newcastle is known for vibrant nightlife, friendly locals and possibly Geordie Shore. Having lived here for many years, I can say they are all true. The food scene has vastly improved over the years and Vegan restaurants are on a rise. From Vietnamese Pho to a full-blown bohemian restaurant and a Japanese vegan tasting menu – you are definitely spoilt for choice that will tickle your taste buds. Last year, Newcastle welcomes Vegan restaurant week where participating non-vegan and vegan restaurants provide vegan options in the form of a two to three course menu for a set price.

Try Time Banhmi along Grey Street for their Vegan Pho, or Bohemian in the city centre which is a vegan restaurant serving pizzas and fusion, also the popular Sky Apple Cafe in Heaton. Notably, restaurants such as The Botanist and Wagamama both have vegan options as well (both located at the centre of Newcastle).

Having lived in Singapore for a few years, I can safely tell you that vegan food has been around for years. They are known for both vegan and vegetarian dishes in hawkers stalls and restaurants alike.

Singapore is a melting pot with a mix of Chinese, Malays, Indian culture with an international crowd, and their food reflects it. You see, both Malay and Singapore cuisine uses a lot of tofu and vegetables in their cooking. They also have ‘mock meat’ such as mock duck, mock chicken which are basically faux meat. And of course, there are plenty of Indian cuisines, Mediterranean, European and International restaurants located around the city.

If you prefer a restaurant over hawker stalls, try NomVnom in Clarke Quay which serves burgers and pasta, or Genesis near to Farrer Park MRT station which serves Chinese and International style vegan food.

The capital city of Malaysia is very diverse, Kuala Lumpur is not only a melting pot of cultures from the local Malays to Indians and Chinese, it’s home to loads of vegetarian or vegan specific restaurants offering everything from traditional Malay food to Mediterranean and Indian cuisine, and mock-meat variations of all the traditional Chinese favorites. There are vegan restaurants available as well as a multitude of restaurants providing vegan options.

One amazing dessert is their Sago Gula Melaka which is sweet and refreshing, and if you want to know how to make it, click here.  It consists of 3 ingredients and takes less than an hour, great for a potluck too.

The land of duck, cheese, and fine wine, it is rather hard to think this city is catered towards the vegan diet but you thought wrong. You see, Toulouse is a student city in France. On my recent trip, I found they are quite diverse in their cuisine, however, you must bear in mind that their lunch hours stop at 2 pm and starts again at 7 pm for dinner (closed in between) therefore, booking beforehand is best.

Try B12 along 44 rue des Sept Troubadours which serves European food and has vegan cheese and pate. Another option is Chez Vegetayelle and Co at 16 place Occitane serving both lunch and dinner all vegan and all organic food.

Milk bars are very popular in Poland. Hold your thought, it’s not what you think. It’s a nickname for a restaurant that serves reasonably priced food. But little do you know, Warsaw has a vegan quarter and a buzzing vegan scene- yep! I was pleasantly surprised.

Warsaw is very trendy and bustling city, with the Royal Route lined with an array of restaurants. Polish food normally consists of lots of meat (mainly fried) with lots of sauerkraut and pickles, and potato! And when they do vegan, they seem to do it properly and incorporate their ‘Polishness’ into it. That said, one of their most famous and oldest Polish recipes is Barszcz which is made from beetroot and vegan (if you exclude the dumplings which they sometimes put in).

Try Bar Stoleczny at Poznanska 7 for the vegan version of the Milk bar serving dumplings, pancakes, and noodles; and Vegemiasto at aleja “Solidarności”

Krakow is only 2 hours away from Warsaw by train. Despite its dark history, the city maintains most of their original features including a castle and a dragon’s lair beneath it. Pierogi is a popular dish filled with multiple fillings from meat to cheese. Again, Krakow is as fast forward as Warsaw in terms of having a variety of restaurants. When I was strolling around, it’s amazing to see the number of vegan restaurants that were around the old town and Jewish quarter vicinity. I was so excited that I actually texted my friend saying she has to come visit!

Check out Glonojad along plac Jana Matejki road that serves vegan pierogi and Cafe Mylnek along plac Wolnica road for vegan breakfast. From the menu’s they all look very Polishesque.

The Scottish capital has been voted as UK most vegan-friendly city in previous years. They have been well known for the vegetarian scene for many years. Now, they have one of the highest numbers of vegan restaurants in the country with restaurants such as Henderson’s Vegan Bistro, Paradise Palms, Holy Cow, and Grassroots.

While you’re here, don’t forget to venture along the Royal mile route, wander along the hidden mews and check out Edinburgh castle.

Bali and Lombok are islands in Indonesia, and very near to one another. Both are notorious for beautiful beaches and volcanic treks, and of course their food and exotic fruits. The diet amongst other things also consists of fresh vegetables, tofu, and tempeh. While you are here, you have to try mangosteen, jackfruit and rambutan, oh and durian! It’s either you love it or hate it but do try it!

Head over to Cafe Organic for their instagramable fruit bowls and rainbow smoothie, or Alchemy Ubud which is the first 100% raw vegan restaurant in Bali. Also if you fancy something different, you can try out vegan yoga retreats in Bali for a mind, body and soul detox.

The city hungry for stews, dumplings, and meat, it is surprising to find that this charming city is actually a vegan haven. Vegan restaurants are in abundance and popular too. Notable restaurants include Loving Hut which is a chain that offers Asian style food, Forrest Bistro located at Londýnská 216/35 that serves Czech or fusion food and Country Life near the Old town serving pizza, pasta, and salad.

Also, please write down your thoughts in the comments below and if you have other city suggestions. Spread love and knowledge!

I love reading your comments, they make my day! And thank you for visiting my blog, it’s highly appreciated! xx

Hey! What’s up? Treat this website as your digital guidebook showcasing Food and Travel Guides from around the world, fun, cultural and adventurous places to visit and stay, plus RECIPES from all cultures. All with affordable luxury and sometimes that extra bit of indulgence… Read more

This site uses Akismet to reduce spam. Learn how your comment data is processed.

This site uses cookies to deliver its services and measure traffic. By using this site, you agree to its use of cookies. AcceptLearn more